Swami Vivekananda’s historic and revolutionary speech delivered on September 11, 1893 in Chicago to the delegates of the World Parliament of Religions marks the beginning of a new era. His address began with these words:“Sisters and Brothers of America”. These soul-soothing words had a magnetic impact on the audience. Swamiji got standing ovation and thunderous applause. These words which came out from the depth of spiritual height. To commemorate this epoch-making speech, it is celebrated as Universal Brotherhood Day and it  is observed on September 11 every year.

Swami’s vision for universal peace and brotherhood is timeless and universal. It’s relevance is increasing day by day because the moral and ethical insolvency is increasing, the world in terms of values is lapsing into primitive state. Swami’s idea of religion is holistic and if imbibed wholeheartedly, it can cure all ills and evils of society. He emphasised that the true religion is that which elevates and ennobles the animal instincts in man and unites him with divine power. It extracts the latent divinity in man and makes him realise his true nature.

To understand Swami Vivekananda’s vision of universal brotherhood and peace in totality, we need to reflect on the rich spiritual tradition he represented, he saw that spirituality was at a low ebb in the land of its birth, glory and grandeur of ancient India was rapidly declining. The only means for the resurrection of humanity was to imbibe and inculcate the spiritual teachings of the ages. Swami’s vision deeply rooted in all-inclusive, all-encompassing and all-embracing Vedic thought. He preached and practised the great Vedic. There is no relation of dominance and subjugation. He discarded the idea of religious supremacy, propagated the message of mutual respect and religious acceptance.

In our school campus also we have celebrated "Universal Brotherhood Day" in a grand way. We have arranged for a big programme and speeches have been given by the dignitaries. So every year we should celebrate this day and the importance of the day as to be followed everyday. As the below given quote of Swamiji,

"Condemn none: if you can stretch out a helping hand, do so. If you cannot, fold your hands, bless your brothers, and let them go their own way. In every man and in every animal, however weak or wicked, great or small, resides the same omnipresent, omniscient soul."

Ganesh Chaturthi is also called Vinayaka Chaturthi, is an auspicious Hindu festival which is celebrated for 10 days every year. The festival is celebrated in the Bhadra month as per the Hindu calendar which generally falls in mid-August to September. It marks the birthday of the beloved elephant-headed Lord Ganesha. Ganesha is known as the God of wealth, sciences, knowledge, wisdom and prosperity, and that's why most Hindus remember him and seek his blessings before starting any important work. Lord Ganesh is known by 108 different names like Gajanana, Vinayaka, Vighnaharta among others. This festival is celebrated with great devotion and joy by Hindus throughout the world. In India, it is majorly celebrated in states including Maharashtra, Gujarat, Goa, Madhya Pradesh, Karnataka, and Telangana.

Ganesha is the younger son of Lord Shiva and Parvati. There are various stories behind his birth but two of them are the most common ones. According to the first story, Lord Ganesha was created by Parvati out of dirt from her body to guard her in the absence of Shiva. She gave him the task of guarding her bathroom door while she took a bath. In the meantime, Shiva returned home and Ganesha, who didn't know who Shiva was, stopped him. This angered Shiva and he cut Ganesha's head after a tiff between the two. Parvati was enraged when she came to know about this; Lord Shiva, in turn, promised to get Ganesha back to life. The devas were sent to search for a child's head facing north but they could only find an elephant's head. Shiva fixed the elephant's head on the child's body, and that how Ganesha was born.

The other popular story is that the Devas requested Shiva and Parvati to create Ganesha so that he can be a Vighnakarta (creator of obstacles) for rakshasas (demons), thus being a Vighnaharta (averter of obstacles) and helping Devas. It is believed that devotees who pray to Ganesha are able to fulfil their wishes and desires. So, the main essence of Ganesh Chaturthi is that devotees who pray to him are set free of sins and it leads them on the path of knowledge and wisdom. People celebrate this festival by singing or playing religious songs, dancing to drum beats and by lighting up fireworks-- all of which add to the festive mood.

In our school campus also we celebrated Ganesh Chaturthi with overwhelmed devotion. We have done pooja along with the students. It was celebrated in a grand way to the core. We feel blessed by celebrating this festival.

So, every year we all should celebrate this pooja in a grand way to get the blessing of Lord Ganesh.

Janmashtami is most popularly known as Krishna Janmashtami, the birthday of Lord Krishna which is celebrated with great happiness in India during the monsoon month. If we go by the Hindu calendar, this important day falls on the Ashtami or eighth day of the Krishna Paksh or dark fortnight of Bhadon month.

The most widely accepted view is that Lord Krishna is the eighth incarnate of Lord Vishnu. We all have known from Mahabharata that the birth of Lord Krishna happened to kill the demon Kansa who happens to be his maternal uncle. As a kid Lord Krishna was named "Makhanchor" means the one who steals butter. He used to steal butter from every household of Gokul. Lord Krishna was a wonder child and his skills were noticed since childhood. People started believing that this small boy named Krishna is among the commoners to save them from all difficult situations. Slowly, people of Nandgaon started celebrating the birth of Krishna in a grand way as they believed this day to be a fortunate one.

We can say that this festival initially originated in Gokul and slowly engulfed the Mathura region and later on the whole Uttar Pradesh state. And now even after 1000 years, the whole country celebrates the birth of Lord Krishna as he is the sign of love, faith, friendship, and peace. Whenever there is some imbalance in the universe regarding peace and prosperity, it is said that Lord Vishnu comes to save the humanity from the hands of demons and evils.

In our school campus also we have celebrated Shri Krishna Jayanthi in a pleasant way. Many religious songs were sung by the students. Mantras have been chanted soulfully. And, a pious speech has been delivered by our teacher. At last, Prashad was also distributed to all.

So, by celebrating this festival, Let's all welcome our Krishna every year to get 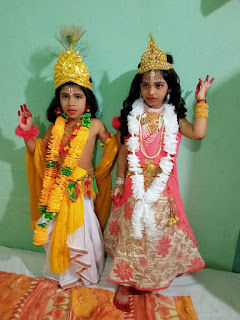 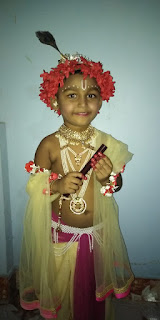 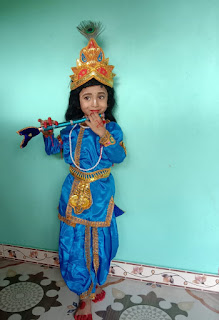 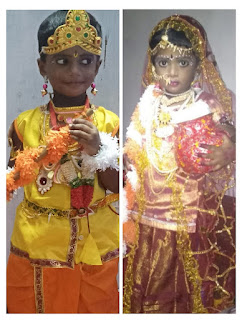 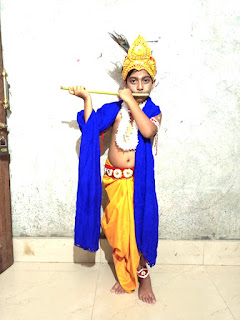 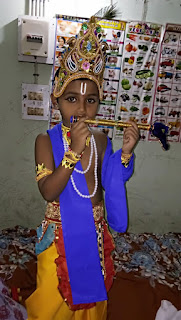